Denver, CO Today, the Center on Wage and Employment (CWED) at UC Berkley released a new study showing that local minimum wage increases have had a positive effect on worker wages and did not result in job reductions. The study, entitled The New Wave of Local Minimum Wage Policies: Evidence from Six Cities, was conducted in Chicago, the District of Columbia, Oakland, San Francisco, San Jose, and Seattle. These six cities raised the minimum wage above $10 per hour and higher than the minimum wages in their respective states. 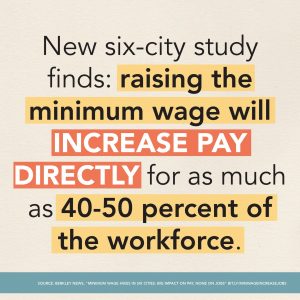 Service Employees International Union (SEIU) Local 105 has been working with coalition partners to pass legislation that would allow local municipalities in Colorado to set a minimum wage that works best for their local economy. House Bill 1368 passed the House but died in a Republican-controlled Senate committee. The coalition is hopeful they will be able to reintroduce the bill in the 2019 legislative session. Jared Polis, candidate for Governor, has expressed support for the concept and has signed on to SEIU Local 105’s Working People’s Platform, which includes a commitment to fight for the local wage option.

Everyone will tell you the state’s economy is booming, but wages aren’t keeping up and workers like myself and others are not feeling those effects, said Corletta Hithon, a homecare provider. The cost of living in areas like Denver is sky rocketing, and even though I work full time I struggle to keep a roof over my head. This study proves that by allowing cities to set a minimum wage that works for their community, we can improve workers  quality of life and grow the economy.

This is the first comprehensive study to look at the long-term effects of local control minimum wage policies. Ten large cities and seven states including Colorado are phasing in minimum wages in the $12 to $15 range.

SEIU Local 105 is an organization of more than 7,500 workers in Colorado. The organization is committed to supporting the dignity and worth of workers and the services they provide and dedicated to improving the lives of workers and their families. They recently launched the Working People’s Platform, which consists of seven tenets that lift up the goals and recognize the everyday struggles of working people in Colorado, including the fight for a living wage. SEIU Local 105 is part of the Service Employees International Union, the fastest growing union in North America with a membership of 2.2 million.