Hardworking Coloradans who are employed full-time are still struggling to get ahead– or even get by. The time for this to change is now. We need an economy and government that will work for all of us, not just the wealthy few.

Without unions, the middle class in the United States would look very different and might not even exist. Strong unions helped create a robust middle class, and as they have come under attack from an agenda that favors big corporations and the ultra wealthy, the economic security of middle class families has slipped. In a recent report, the Center for American Progress discussed how unions make an important difference in wages and working conditions, even for those who aren’t members. Whether you are a member or not, unions represent the collective political interests of workers who would not otherwise have the political clout to fight for better wages and benefits against the super-wealthy and corporations who care only about profits. Unions also help maintain wages in industries that have an impact across the job market, so wages are pushed up rather than pressed down.

Quoting the study, “Without the counterbalance of workers united together in unions, the middle class withers because the economy and politics tend to be dominated by the rich and powerful, which in turn leads to an even greater flow of money in our economy to the top of income scale.”

In Colorado, where the economy is booming, increased housing costs eat away at any income increases. Even then, wage increases have been too minor to make a difference for many workers at the bottom of the pay scale. Unfortunately, working harder hasn’t meant doing better in a long time.

It’s more important than ever that our legislators pledge their commitment to supporting Colorado working families by supporting the seven pillars of the Working People’s Platform:

Gubernatorial candidates, Mike Johnston, Cary Kennedy, and Jared Polis have all signed on and endorsed the platform! Learn more about these candidates by clicking here. 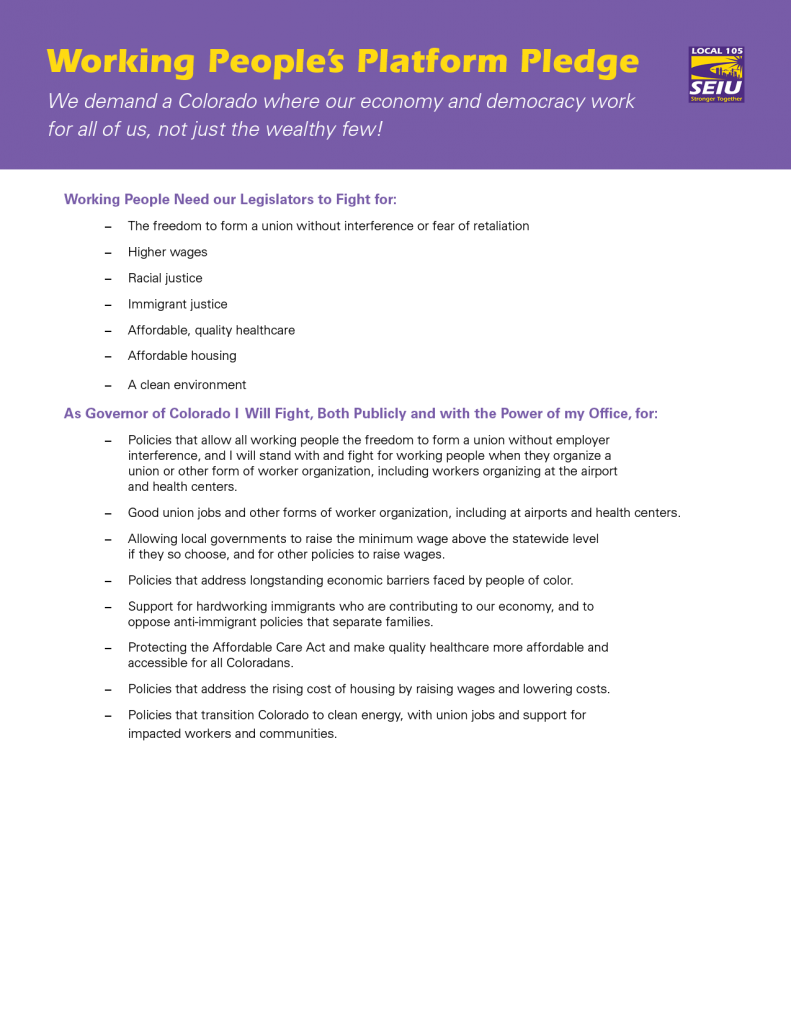