There is a lot of news these days about the red-hot Colorado economy. Unemployment may be down, but wages are stagnating. Inflation, largely related to higher housing costs, is also increasing faster than wages can keep up. As good as the economy is, many Coloradans are being left behind. As of 2016, half of all Coloradans were working for wages that were less, after inflation, than what they were in 2000!

You might think that given how low unemployment is in our state and the difficulty finding workers for some jobs, that wages would be going up faster in order to attract workers. While that is happening in some cases, wages for most people are barely budging, certainly not enough to keep up with rapidly increasing costs. 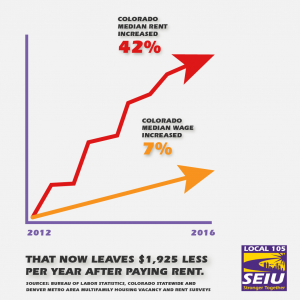 Unfortunately, there are those in the Colorado legislature who do not understand how hard it is to find affordable housing on the average wages in our state, and this problem is worse in some places than others. The Front Range Metro Area, which includes the areas around Denver, Boulder, and Fort Collins, has experienced some of the highest increases in housing costs in the country. Higher housing costs push people out of their communities and make it more expensive to get to work– further eating into already inadequate wages.

Trump’s economic agenda has been relentlessly aimed at helping big corporations, the wealthy, and Trump himself at the expense of the rest of us—and it’s succeeding wildly. New numbers show that for Americans, real wages are stagnant and even declining because consumer prices (costs for everyday spending) are rising. Americans are losing purchasing power: average hourly earnings … Continued

Study Backs Coalition Efforts to Increase the Living Wage in Colorado Denver, CO – Today, the Center on Wage and Employment (CWED) at UC Berkley released a new study showing that local minimum wage increases have had a positive effect on worker wages and did not result in job reductions. The study, entitled “The New Wave of Local Minimum Wage Policies: Evidence from Six Cities,” was conducted in Chicago, the District of Columbia, Oakland, San Francisco, … Continued

It might seem like the Colorado economy is thriving because of low unemployment, but the economy is still failing to benefit all Coloradans. Despite the narrative of economic prosperity, most Colorado workers continue to face economic hardships because their median hourly wages have hardly changed in years despite rapidly increasing rents and costs of living. … Continued